I have a 1.8 k-series SuperSport. Recently got the car out of storage and the engine temps are misbehaving.

For the first 30 mins of driving everything is as it should be; the coolant temp hovers around 80 Celsius in all conditions. However, thereafter the temp will do two things. Yesterday, the temp rose to around 95-98 Celsius whilst waiting at a light. Today, the temp remained at 85 but rose to around 95 just after I pulled away from a light. Conflicting behaviour. The only difference is that I bled the system in between.

I jacked the nose up, got the engine running, released the clamp on the return from the heater matrix until coolant trickeld out, then I released the bleed screw on the top of the radiator in 3 second bursts to let any residual gas escape.

I have been running around with an OBDII reader plugged in so can confirm that the ECU coolant temp sensor and the gauge are moving in the same direction. Not necessarily at the same rates but the trend is consistent across both so I don't think there's any major measurement error.

What could be going on here?

1. I still have air in the system somewhere and my bleed technique needs work!

2. Thermostat is on the way out

At a bit of a loss now so would appreciate some advice.

Yes, you could still have some air in there. You could add massaging the hoses to that technique. Or it might now be time to drill a hole in the thermostat... and some Members recommend that anyway.

You can check if the thermostat is opening by feeling the external temperature of the hoses as it warms up.

Do the coolant and the engine oil both look normal?

Was any work done to it just before it went into storage?

And is the radiator fan blowing in the right direction?

Thanks for such a quick reply.

1. What does drilling a hole in the thermostat do - make it open sooner as closer to ambient temp?

2. I will check that the hoses change temp as the car warms up.

3. The coolant looks pretty good - nothing out of the ordinary.

4. The car has had a bit of work recently:

- The engine oil was replaced a month ago. The level is correct - checked when engine is hot and running - 5W50.

- I had the cam timing perfected and the belt changed 2 months ago by DVA.

5. The radiator fan I believe is blowing in the right direction; blowing air through the radiator and out the nose.

Any idea why the engine temps are stable for the first 30 mins of use but start to go haywire thereafter? I can't rationalise this bit of the puzzle.

"What does drilling a hole in the thermostat do... ?"

AIUI there are two beneficial effects:

It allows air to pass when bleeding with the thermostat cold and closed.

And it provides some warming of the coolant in the radiator so that the thermal shock to the rest of the system is lower when the thermostat does open.

"The radiator fan I believe is blowing in the right direction; blowing air through the radiator and out the nose."

It should be blowing air in the same direction as the air moves when the car is going forward...

If you drive consistently without stopping at traffic lights etc, is the temperature consistent?  Has what you're experiencing changed from previously or is the car fairly new to you?

Hiya Samsul - in essence sounds like a simple fix, - thermostats can get sticky and erratic with age.

I note the very good advice here about the fan direction and thermo modifications, I went a tad further and installed a QED bypass system, and also fashioned a cowling for the rad, and extra fan (manually operated) in front of rad - bit OTT for your symptoms but in sunny AUS it works a treat.

Essentially from my reading the K series is the "car school drop off" type engine, - heat up quickly in cold climate and stay hot to run the systems, in our sevens we need more reliable longevity out of our head gasket/ engines so less thermal shock and more competence on track/ fast road.

It would be interesting to look at the Chinese MG marque engine systems as I BELIEVE they are running a re engineered K series.

Thanks for the feedback all.

SLR - When driving consistently the temp is where I'd expect (82-85) and remains stable. The heating up only appears when stopping or immediately after pulling away. And again, this behaviour only starts after around 30 mins on the move; prior to this the temp is stable at lights and when pulling away. This is the part I find so odd! This behaviour is new. I have had the car a year (6,000 miles) and this issue has appeared within the last 100 miles so something has changed but I can't work out what yet.

Tomorrow morning I am going to check the fan direction, re-bleed the system, check the thermostat is opening, and do another leak-check. Will report back.

Before doing anything else, fit one of these into the heater/bypass circuit at the rear of the engine. It prevents false readings caused by the manifold heating the coolant rail. This happens when stationary, in traffic etc, but only when the coolant gets warm enough to have an effect.

You'll also need the blanks for the two outlets on the coolant rail (Caterham can supply) and if you have the earlier VDO gauges you need to earth the new pipe by running an earth lead to the threaded boss, later Caterham branded gauges don't need the earth strap. 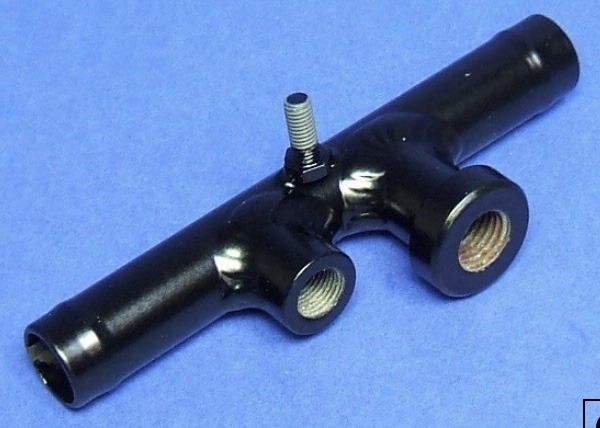