The venue is the Test Track at the Group Lotus Cars factory at Potash Lane, Hethel, near Wymondham, Norfolk, NR14 8EZ, off the B1135 about 3 miles from the junction with the A11. The north end of Potash Lane is closed to traffic.

The village of Hethel gave its name to the former RAF Hethel bomber station, which has been the location of the head office and factory of Lotus Cars since the 1960s. The Lotus Cars Test Track uses sections of the old RAF Hethel runway.

The track contains a series of bends, hairpin corners and straights designed to put Lotus' high performance cars through their paces. It was officially re-opened on 21st June 2011 by Nigel Mansell having been totally renovated to bring it up to FIA standards

The sprint takes place over 1.33 laps, Graham Hill, Andretti and Senna Curves being tackled twice. It contains fast straights, sweeping corners and technical sections and is one of the longest sprint courses in the country. For practice there is only one run but it consists of two full laps plus another one third of a lap, the second practice lap is a flying lap. 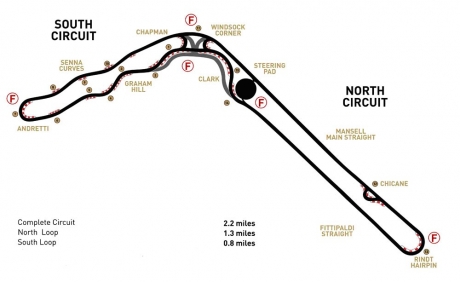 Start
The start is from the pit lane. On entering the track get quickly over to the right for the first corner.

Graham Hill
A fast sequence of left, right, left follows immediately. Your speed will be increasing and you may well find that you have to lift slightly through this section. After the final left hander you will be accelerating hard towards the Andretti hairpin.

Andretti
The Andretti hairpin is surprisingly fast and has a lot of grip in the dry. It has a late apex and it is important to get a good exit onto the Senna Curves which are very fast.

Senna Curves
At the end of Senna Curves there is an artificial chicane. This is another spot where it is important to get a good exit as it is followed by the Mansell Main Straight.

Andretti
You are now back at the Andretti hairpin and the finish is just after Senna Curves.