To find out more about the Super Seven 600 visit https://www.caterhamcars.com/en/models/the-iconic-range/super-seven-600

For more information on the Super Seven 2000 visit https://www.caterhamcars.com/en/models/the-iconic-range/super-seven-2000

Ahead of the brand’s 50th anniversary next year, the latest editions take inspiration from the Caterham’s early ‘Super Sevens’ introduced in the 1970s and popularised through the 1980s; a classic, British, lightweight, two-seater sports car with the perfect blend of style and performance, yet re-imagined for the 21st century.

While these models may look similar, they offer two very different driving experiences.

Super Seven 600 is an accessible, pure, simple, driving experience but at a lower speed. It is a car for those who want to enjoy a leisurely Sunday drive with the wind in their hair but are less focussed on bhp and 0-60 times.

Performance fans looking for more brutish power, faster speeds and a car that wants to be driven more enthusiastically, the Super Seven 2000 may be a more appealing vehicle.

Both models will be available for self-assembly in the UK market as a component kit for those who crave the enjoyment of assembling their own car.

Super Seven 600 is powered by a 660cc Suzuki turbo engine producing 84 bhp and achieves 0-60mph in 6.9 seconds as found in the Seven 170 model and shares its live axle chassis design. In comparison, Super Seven 2000, following popular demand, features a 2,000cc Duratec engine which generates 180bhp and registers 0-60mph in 4.8 seconds, this model is closely related to Seven 360 and as such utilises the ever-popular de-Dion chassis found in the majority of Caterham models. Subsequently the Super Seven 2000 can also be purchased in the larger chassis variant.

Customers looking to enhance the handling of both cars can add a limited slip differential.

Drivers of Super Seven 2000 can up the performance dial even further by adding a sport suspension package featuring a rear anti-roll bar and adjustable platforms as well as front ventilated discs with quad piston callipers.

Exterior and interior look and feel

In addition to the Seven’s usual driving performance, visually the car excels internally and externally.

From the outside, both Super Seven vehicles come with the flared front wings previously seen on Super Seven 1600, Sprint, Super Sprint and a plethora of Caterham models throughout the 1970 & 80s. Meanwhile, Super Seven 600 boasts 14” silver Juno wheels, while Super Seven 2000 features 14“ Classic wheels.

Drivers can pick from a range of exterior colours including Gravity Black, Exocet Red, Vintage Green and Firecracker Yellow.

The colour options don’t stop there as Caterham is launching four exclusive paint finishes not seen on any other Seven to date: Bourbon, Ashdown Green, Windsor Blue, Fawn.

Furthermore, as an optional extra, drivers can pick the look and feel of their alloy wheels with a choice of Gold, Body or custom-coloured alloy centres with diamond cut lip.

Inside the car, customers can choose from a range of additional colour options to give their Seven that personalised feel. Drivers can pick colours for the carpet, dashboard, leather seats, gearbox and handbrake gaiters.

Some of the colours available for these elements of the interior include Deep Red, Cream, Birch White, Burgundy, Ginger, Admirability Blue and Biscuit Beige.

These colour options bestow the Super Seven 600 and 2000 with a level of finish befitting such significant models in the Caterham range and help to enhance the retro-inspired look and feel.

Both models will be initially available in the UK with Super Seven 2000 on offer to the US market.

Super Seven 600 comes in a standard chassis only while Super Seven 2000 is offered in standard and large chassis sizes. All versions are available in kit and fully built forms.

CEO of Caterham Cars, Bob Laishley, said: “With Caterham Cars celebrating its 50th anniversary next year, now feels right to be adding cars to our range that take inspiration from our past.

“We’ve taken what was great about Sevens of yesteryear, the design, look and feel, and reimagined them for today.

“Super Seven 600 and Super Seven 2000 will offer two very distinct driving experiences, appealing to a wide range of driving enthusiasts who want a taste of a modern Seven but with the charm and retro-styling of our vehicles from the 70s and 80s.” 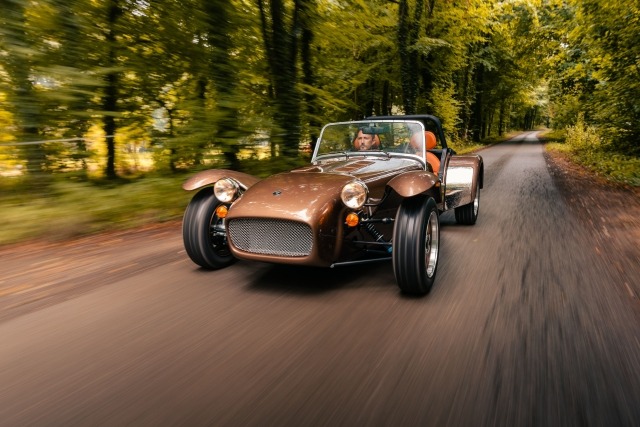