I have a Quaife Type 9 gearbox that has an oil leak from the front face, between the bell housing and the gear case.

I have hauled the motor and 'box out, separated the gearbox from the bell housing, noted the oil leak appeared to be from the gasket under the clutch release bearing carrier. I checked the sealing of the layshaft support spigot, that appeared to be ok, and there wasn't any oil outboard of the 1st motion shaft seal.

This gasket was of a cork material, at 0.060 inch thick, I had some of this on the shelf, so using the original as a pattern cut a new gasket.

Smeared the mating surfaces with Hylomar, which I allowed to dry, before reassembling, and I did clean all surfaces to remove any oil film.

Got everything back together, engine and gearbox back in the hole, all the other stuff to make it go in place all the fluids replaced.

Off down the road for a test run. when I checked underneath in the garage, there was evidence of an oil drip on the very front of the gearbox, and it had leaked whilst on my 30 mile run, as there is an oily film under the car and on the back axle.

So, do any of you know what the correct gasket material is for this position.  As it seems this cork stuff isn't up to snuff.

Strangely this gasket, pictured on the Burton web page is of a cork material. Yes I know it's only GBP 2.50, but Burtons send stuff out on DHL at an exorbitant cost, so I won't be getting one from them.

Happy daze, now the summer is fizzling out.

Drat you poor fella! I am racking my brain trying to remember how/ what I did to mine last year when it was out, I tried to produce a go pro / youtube of all the steps but my go proing is less competent than my spannering (which is no mean feat! :))

If you didn't replace the input shaft seal that has to be suspect. Ford use that cork seal on the type nine box so although it seems a strange choice of material it does work ok if fitted properly. Are you sure that the leak isn't from around the selector rod area at the top of the box and is running down the face (a frequent cause of oil leaks).

Good luck in curing it

Thanks for the words gentlemen, the input shaft seal appeared to be dry on the outside, no sign of oil in the clutch bearing carrier sleeve, and as for the potential leak from the selector shaft position, I did apply Hylomar to the gasket there, specifically to prevent leakage.

However later yesterday I was looking over the gearbox in situ, and there appeared to be oil running down from the selector shaft detent pawl adjusting screw, (is that what it's called) but this might be another red goose or wild herring, to mangle the metaphors.

Plan of action now is clean the area around where I think it is leaking, apply some clean white cloth tied onto the gear case and go for a drive, when it stops raining, very technical I know, but might save having to pull the donkey out again.

Gentlemen, happy days here just now, the wretched oil leak is cured, turned out to be leaking from the selector rod locking pin, so some quick cleaning and application of thread sealant to the screw that adjusts the spring pressure on the rod, and a quick 60 mile trip round the local countryside, and the gearbox is dry underneath.

However there now appears to be a leak from the 2nd hand diff. assy. not sure if it's from the pinion oil seal or the mating faces, new adventures tomorrow, hmmmmmmmm. Getting a bit tired of all these adventures, never mind , bash on.

Ahh I know that sucker well, I had big issues with the detent pin mechanism too tight, managed after full gearbox rebuild to lighten the pressure a bit. Now its magic at shifting smoothly.

A lot of talk on here about totally different "feel" to the gearshifts with identical 6 speed caterham boxes (actually same box as yours just a load of extra gubbins) and I reckon the little pin, selector could be the hassle.

At least the Diff is not quite the same hassle to get off and back on again, great work, glad you'r eon road again.

Cheers Tim, a quick question, how far down the hole is the screw which applies the pressure on the spring on your box?

Having removed mine for this work I find the detent action to be rather course, lumpy, agricultural, I have moved the screw in and out somewhat, but hmmm, not quite as I recall it previously, may go like you, just keep shifting it until it is OK.

And it's never been as slick and smooth as the BGH 'box I had previously. 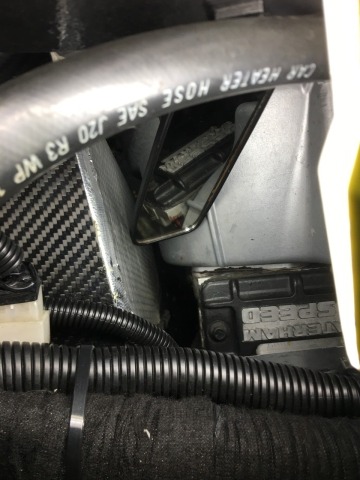 Crikey Nigel you're testing my limited photographic/ yoga skills with this one :)

Sooo if you can see in the bottom right corner of the mirror I have placed in situ there is a black (with red threadlock) grub screw exposed - now I have the same amount exposed as is inside the housing - about 10mm.

I replaced the flat head grub screw to allow me to get better access with an allen key than I would have had with a flat blade screwdriver, and it works. I did give the whole mechanism a thorough clean, de rust and lube prior to fitting also the ends of the selector rod that it acts on got a dremel to death to polish and smooth out some marks on them. - so far so good.

Hi Timb, thanks for te picture you posted, I hope you didn't twist or strain anything important to get this.

I see there is a section of threaded screw protruding from the gear case, this might be a better way for me to deal with mine,

Something to look at when it's a bit warmer and not pouring with rain.

Cheers, and it is likely still leaking so now my attention will be on the tail housing seal, more fun and games.