Recently bought a lovely 1 owner R300 K, (forgotten what a great wee driving machine these are having owned one way back when they first came out!).

Anyway, I'd appreciate a wee refresher as to current thinking on lubrication for it please. The car has a factory Apollo and also sump foam. I won't be tracking it and wanted to know whats the frequency to change the foam or potentially just remove it altogether?  Also, I have about 10 litres of 5w50 Comma Motorsport oil in the garage, is this the right stuff?

Ditch the foam. Modify the sump gasket by putting a couple of holes near the pickup. Oil is correct.

I thought 2020 was the year that was going to give me all I wanted. It turned out to be the year to make me appreciate what I've got.

I think the consensus is to ditch the foam permanently.  That's certainly what I did.

Comma Motorsport 5W/50 is exactly the right oil to use.

And this is where to add the extra holes in the gasket: 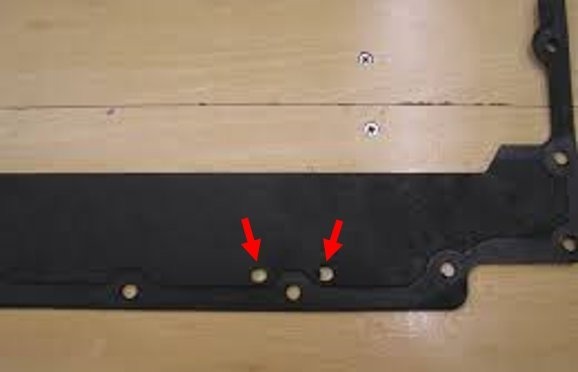 I have had an R300K for 12 years and have it serviced regularly at Sevens and Classics. They have never suggested removing the foam and each time it's been changed, it was fine and not degrading. However, regular oil changes and foam changes need to be done.  The 5W/50 oil is correct.

I'm not sure what the foam is supposed to do. My guess is it helps filter out bubbles descending towards the sump.

I did remove the foam eventually but never had any problems with the three or four I had replaced.

The simplest answer to whether it stays or goes is:

If the engine goes bad because of having the foam it is your fault for not removing it.

If the engine goes bad because of not having the foam it is your fault for removing it.

The K series installation  was designed with a shallow sump to fit under bonnet. The consequence being a low shallow volume of oil which was susceptible to aeration - tiny bubbles suspended in the oil. This was amplified buy the high lateral g forces generated by the cars. The aerated oil would circulate to the hydraulic tappets acting as a spring the valves bounce resulting in  loss of control, the valves would touch the pistons bending them, eventually with a bending fatigue the valve heads would drop off resulting in total engine failure. The tiny bubbles suspended in the oil  need to be burst or be purged .  Air is  removed / bubble burst if the oil hits a solid surface / object ie baffle, foam, block or sump.

The sign off test devised by Caterham for a 1400 Supersport was 1st gear (5 speed box) max revs three figure of eights as fast as possible brake to a stop idle the engine and listen to see if the tappets rattled / aerated. The  foam arrangement gave the required results.

To run an  Apollo with the increase in oil  volume and the centrifugal purging of air from the system would probably negate the use of the foam.

I have  run the same foam for some 27k miles 13 years without issue. There have been  failures of the foam leading to engine failure possibly due to :-

There is no clear reason as to the cause of failure of the foam.

Is that the general consensus: that if you run an Apollo, then a foam baffle is not necessary?