Having returned to the club after a few (several!) years' absence, I'm struggling to find old topics using the search function of the new forums so I'm hoping someone may be able to point me towards some useful information!

Several years ago my rack developed play and I had it fully overhauled by Titan (around 2012). It's now developed a small amount of vertical play in the nearside rack bar/rack housing - ie NOT the track rod inner joint.

I contacted Titan who advised that the first overhaul should never have happened - and they do not / aren't allowed to overhaul Caterham racks - but they could supply individual parts but cannot advise any tech specs eg torques for reassembly of the rack.

Caterham also won't entertain having the rack returned to them for them to have Titan rebuild it - leaving the only option being a £700 new rack!

I read somewhere that the design of the rack is very similar to the Elise rack - for which an overhaul manual does exist.

Would anyone happen to have a copy of the Elise manual, or have any instructions/specs for stripping and rebuilding the Caterham rack, specifically around disassembly and reassembly to replace whatever bush is supporting the rack bar on the nearside?

I have the Elise service manual. Please send me a Private Message with your email address.

Here's the discussion of alternative search methods, including my recommendation: "Search facility".

I did this rebuild as it's the plastic sleeve that starts to have a bit of play. Mine was solid for a few hundred miles and then came back. Also checked the Caterham demo cars including the new 420 Cup and that has a bit of play as well.

Overall, I personally wouldn't bother rebuilding it and just chalk it up as normal.

Chat to the racing teams, DPR or McMillan Motorsport, see what they do for steering rack bits, or approach some steering rack reconditioners. I used a company in Birmingham, ICS, there's another Kiley Clinton who are also very approachable.

Mines been `baggy` for 10 years but never failed MOT

The Elise service manual didn't contain as much information as I thought. I think that there's another document with an exploded diagram but I can't find it. Anyone? 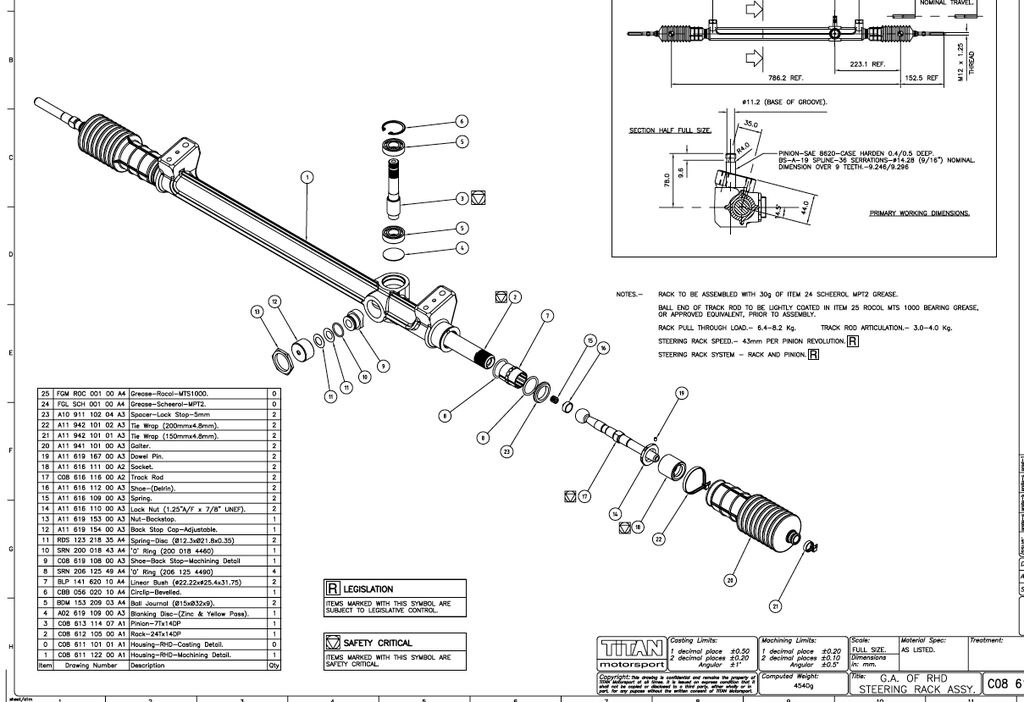 Its a bit hidden within the Wiki page, but some images here of the Elise rack too.

And the rebuild kit you need -

To note, the Elise rack uses equal sized rack rubber boots / gaitors and the Caterham rack does not.  So if you want to replace them you'll need an additional separate set.

Do you mean that the Elise kit fits a caterham rack?