Oops sorry Jon, I was looking at a modified wiring diagram, not the standard one

The Brown/Blue tot he Main Beam Flash switch is indeed a permenant feed, not ignition switched.

The terminal of the ignition barrel with the white wires going to it is the ignition switched feed, but isn't fused, so not a good idea to connect to that.

The least intrusive ignition switched connection would be to try to find the Green wire intended for an “optional low oil pressure warning light feed” probably taped up in the loom between/near the Tacho and Speedo. It is also connected to the green wire going to the heated screen switch, so you may be able to trace it from that. It's fused at 10A via Fuse 4.

If you don't mind cutting into the wiring under the dash then an alternative ignition switched feed is the orange wire going to the Wiper and Washer switches (fused at 15A via fuse 10).

I'm not sure how that will help you get your unit to work, but it might *wink*

Thanks Ian - at least I now know I'm not that thick or going mad!!

I did see a 'surplus' wire under there, and my car also has a Heated Screen switch but normal screen, so that gives me a couple of options to try; I'm sure I'll get there in the end, and anyway this is all part of the fun of owning a 7!

Thanks for your help

For reference, I connected the red 'Headlights' wire on the unit to the Single Blue wire on the Dip/Main toggle switch (Permanent Live); The black 'Ignition' wire was connected into the green wire on the Heated Screen switch (Ignition switched feed).

Now all works perfectly, so again Thanks for all the help and advice.

I wired a light to my dash to my fan override switch, to show when it was in operation. This also kicks in when the thermostat switch kicks in and is nice as a handy reminder it's reassuringly operating.

When I switch off and remove my key the light turns on if I haven't switched my cut-off switch. At first fit I was confused as to why this happened, but decided I liked this as I can see very easily if I have left the electrics on. It reminds me to turn the cut-off and at that point it turns off.

The cut off of course kills the lights as well.

The light is marked 'fan switch' on my dash, it's not a distraction when driving as it is slightly hidden from eye line by steering wheel. But is a great reassurance I find in traffic and for keeping a reminder to check temp guage. 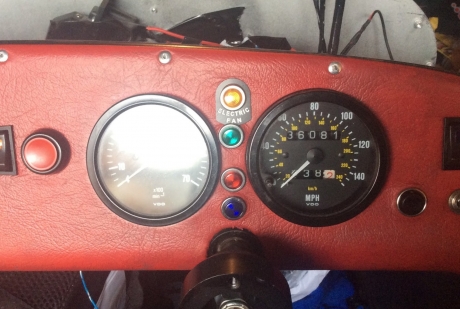 Last weekend I also left the lights on whilst parked and needed a jump start to get going.

I also bought a lights on warning buzzer of ebay that looks identical to the one pictured above. 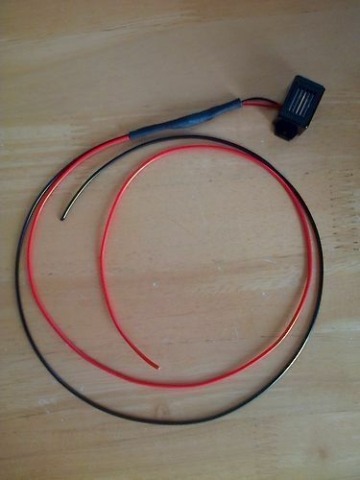 Wired it into the back of one of the instruments, all of which have a red/white wire for instrument illumination and a green switched ignition power feed.  Quite an easy job if you're good at hanging upside down like a bat

Reminds me of the ignition warning light circuit.

Did you connect wires under the dash while in the bat position? It's often easier to make a tiny subloom on the bench and then fit that using existing terminals and connectors while under the dash... or while using a smart 'phone...

Why don't we have headlights that go off with the ignition? Given our wiring has both feeds in any case.

I think that it's a design habit that started well before modern electrics and electronics.

A directly switched incandescant headlamp circuit takes quite a high current and not running it through the ignition switch was better for the switch.

If the ignition circuit failed while you were driving at night it would be dangerous if the lights also went out.

Just out of curiosity, is there a way to disable the buzzer for situations where you want to leave your side lights on? Tin tops will only trigger the buzzer when the door is open...