Using my MEMS3 Mapper you can now add a configurable ECU-controlled shift light to any MEMS3 Caterham, and configure the shift light on a SuperSport.

I was always told that this was done by “reprogramming the air conditioning output”, but it turns out there are no actual programming changes and just some simple map adjustments required. I’ve managed to figure out how they did it, how it was wired up, how to adjust the speed at which the shift light is set and how to implement the same changes on non-SuperSport ECUs. I’ve made a wizard in my MEMS3 Mapper application which makes configuring the shift light on any MEMS3 Caterham trivially easy.

HOW THEY DID IT

The shift light is driven off the ECUs Air Conditioning Compressor Clutch output terminal, Pin 53. Before I looked into this, I was puzzled why the ECU would have a facility to turn on the air conditioning at high RPM. Of course, it doesn’t. The shift light is wired up as per the wiring diagram below. The left-hand diagram shows how the ECU is wired to a pin on the tachometer plug. The middle diagram shows how you can wire a shift light up using a regular LED, but this also gives away how things are wired inside the tachometer. The LED is fed from the ignition-switch 12V instrument supply through a suitable resistor, with the negative side of the LED going to earth. This would mean that that the LED was permanently illuminated, except that the ECU’s output pin is connected to high side of the LED. The ECU output is an open-collector transistor switch to earth; when the ECU tried to turn the air conditioning compressor clutch ON, it pulls the positive side of the LED down to earth, turning the LED OFF. And when the ECU turns the air conditioning compressor clutch OFF, it floats the output pin and the LED turns ON.

So in fact the ECU has the facility turn the air conditioning compressor clutch OFF at high RPM, to protect the compressor against damage from over-speed, and this is what has been hijacked to make a shift light. 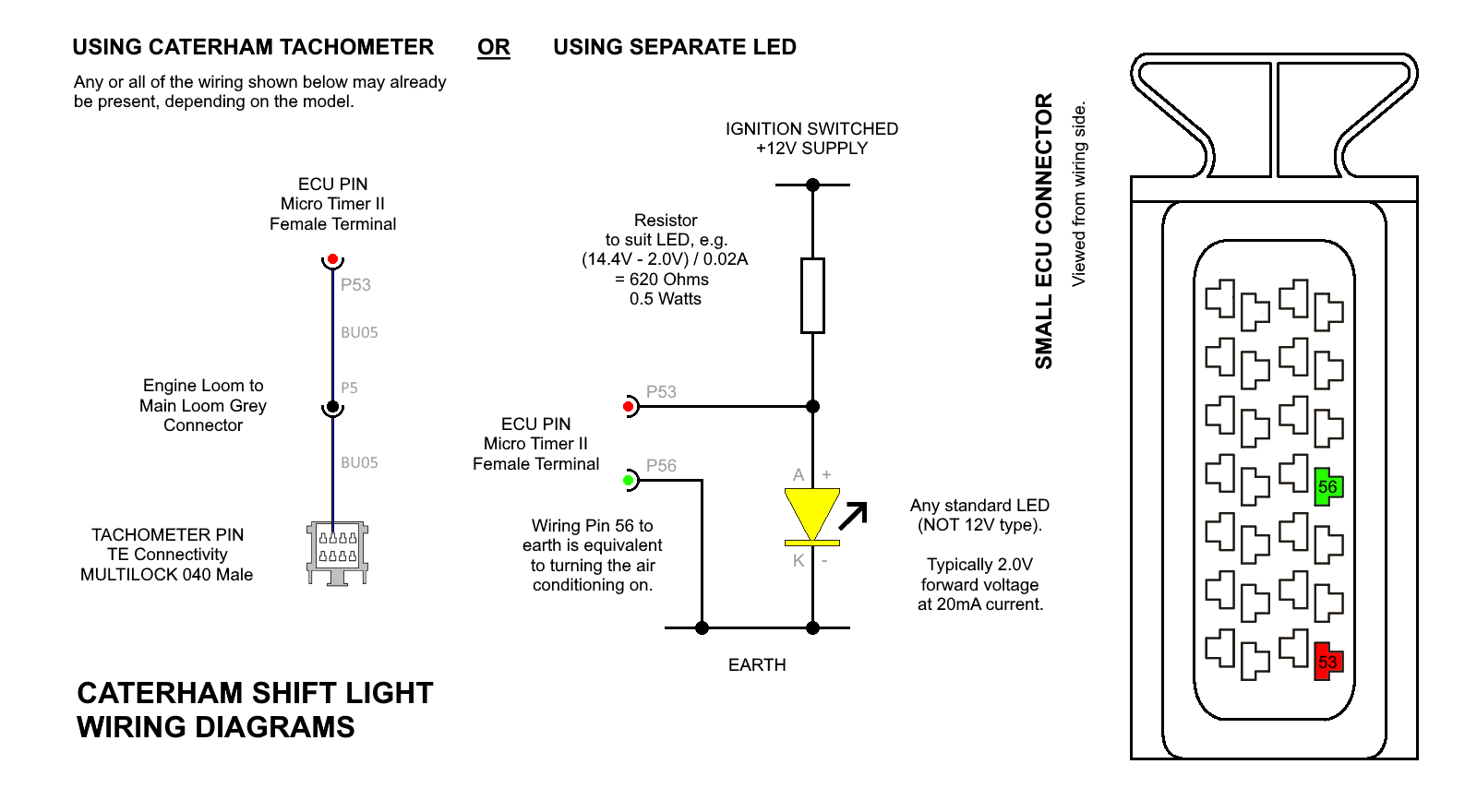 There are a number of pre-conditions for the ECU to turn the air conditioning compressor clutch on:

·A certain time must have elapsed since the engine started. This allows the engine to stabilise after starting before the air conditioning load is applied. This time delay is controlled by a table in the map. In a typical MG or Rover map, this table specifies a time delay which decreases with coolant temperature like this: 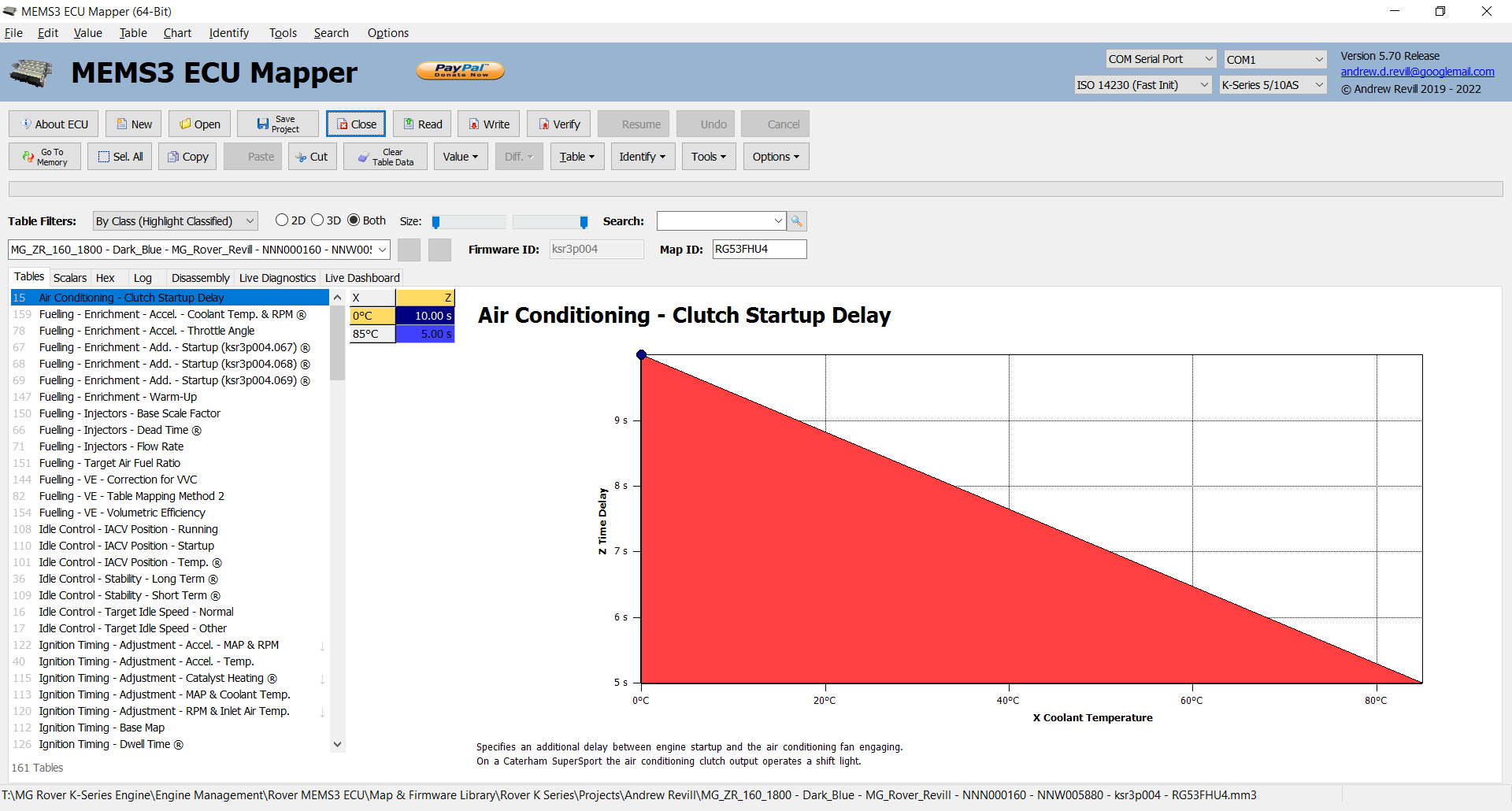 In a Caterham SuperSport map, this table is filled with zeros to minimise the delay like this: 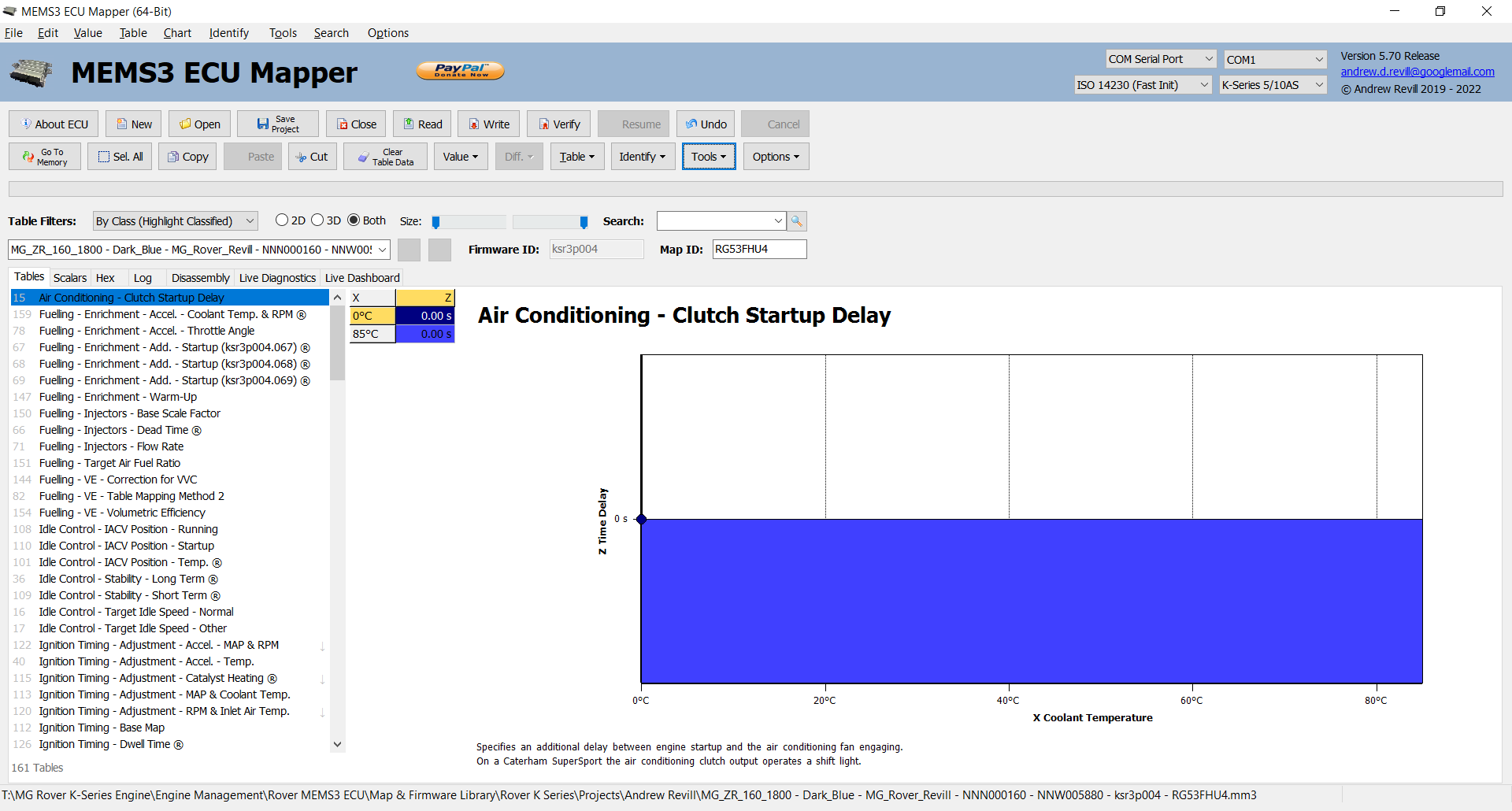 There are a number of other factors which lead to a small delay even where no additional time delay is specified by this table; for this reason the shift light remains illuminated from something 1 to 1.5 seconds after starting.

·There is a maximum coolant temperature for the air conditioning to operate, to take the load off the engine when it is hot. This is typically specified as 118°C in an MG or Rover map, and raised to 140°C in a SuperSport map to ensure that the shift light always operates.

·There is also a restriction of a minimum value of some other analog quantity that I have not yet been able to identify. Whatever it is, it’s an analog voltage or current sensed by the ECU; it’s in Slot 9 in the analog converter results table. It has a default value of 1000 for use when the corresponding sensor gives implausible results and it always reports 1000 on a Caterham. None of the input pins seem to drive it on a Caterham ECU as far as I can tell. Hopefully I’ll get some time on an MG or Rover with air conditioning installed in the near future to figure out exactly what it is measuring. In the meantime, an MG Rover map normally specified a minimum value of 1300 for this parameter (which would mean the air conditioning would never operate on a Caterham with the default value of 1000) and SuperSport maps change this to -500.

Last but not least, there’s a maximum RPM and again a hysteresis specified. So for example a maximum RPM of 7000 and a hysteresis of 200 would mean that the air conditioning would turn off (shift light ON) at 7000rpm, and not turn on again (shift light OFF) until the engine speed fell to 6800rpm. These are typically configured to 200rpm below the rev limit with 50rpm hysteresis in a SuperSport map.

As there are a number of different settings in the map which need to be configured correctly to set up a shift light, I’ve added a wizard to do it for you.

HOW TO CONFIGURE A SHIFT LIGHT

You will need to use version 5.71 Release or later of MEMS3 Mapper.

Read your ECU or load a project file in the normal way..

If the map in the ECU appears to have air conditioning settings configured, you will see the prompt below. Note that most Caterham non-SuperSport ECUs will have residual air conditioning settings and so trigger this prompt. If your ECU is already a SuperSport with a shift light configured, MEMS3 Mapper will recognise this and not display the prompt: 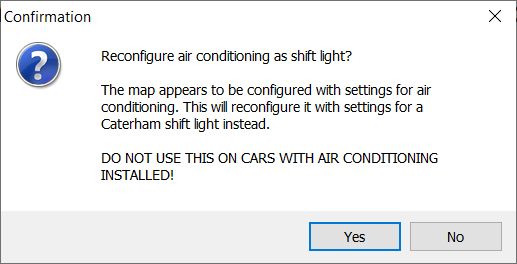 To continue with shift light configuration, click Yes and you should see the following dialog:

The current rev limit is displayed and default On At and Off At engine speeds are shown. The rev limit is determined from the Rev Limit scalar in the map (for non-VVC engines) or from the largest value in the Rev Limit table in the map (for VVC engines). For an existing SuperSport ECU or any ECU with a shift light already configured, the On At and Off At engine speeds shown will be those previously set; in all other cases they will be 200rpm and 250rpm below the rev limit.

You can click the Wiring Diagram button to display the wiring diagram shown above.

In this dialog, enter the engine speeds at which you want the shift light to turn on and off. Then click OK.

The wizard will then apply all of the necessary changes to the map to configure the shift light:

Write the map back to the ECU using MEMS3 Mapper in the usual way.

An original Caterham SuperSport will have all of the relevant wiring in place. ECU Pin 56 will be connected to ground. ECU pin 53 will be connected to the tachometer connector pin show in the left hand diagram, through Pin 5 of the grey engine loom to main vehicle loom grey Sumitomo connector, using Black/Blue 0.5mm² cable. A non-SuperSport Caterham will usually have the LED and resistor in the tachometer but the wiring may or may not be present in both the engine loom and main vehicle loom and may need to be added. Alternatively you may choose to use your own LED (for example for brighter shift light that gets your attention more easily), in which case you need to wire it as shown in the middle diagram. A Caterham engine loom, either SuperSport or RoadSport, should already have ECU Pin 56 grounded. You should use a regular LED with a forward voltage in the region of 2V, rather than a “12V LED” which has a built-in resistor. Typical forward current for the LED will be 20mA. To work out the value of the resistor needed, take the supply voltage with the engine running (e.g. 14.4V), subtract the forward voltage of the LED (e.g. 2.0V, giving 12.4V) and divide by the LED forward current in Amps (e.g. 0.02A for 20ma, giving a resistance of 620 Ohms). Then just pick the nearest common resistor value, it’s not that critical. A 0.5 Watt resistor should be sufficient, but you can work out the maximum power required by multiplying the voltage with engine running by itself, then dividing by the resistance (so 14.4 * 14.4 / 620 = 0.33 Watts in this case).

Be sure to connect the LED the correct way around. If it has flexible wire leads, these are usually colour coded red for positive, black for negative. If it is just a plain LED component, it will usually have longer lead for the positive side (anode) and one flat side for the negative side (cathode).

The right hand diagram shows the smaller of the two ECU connectors, viewed from the wiring side, highlighting the two pins you need connect to. These require Micro Timer II terminals and seals. There are white secondary locking pieces on the connector which need to be clicked to one side with a screwdriver in order to allow terminals to be inserted or removed, and clicked back again in order to allow the connector to fit onto the ECU.

Exactly as for a regular SuperSport, the shift light will then illuminate under the following conditions:

·When the engine is not running.

·For about 1 to 1.5 seconds after starting the engine.

·When the engine speed exceeds the On At Value.

o   Until the engine speed falls back to the Off At value.

I’ve tested this across a large number of different ECUs, firmwares and maps. As far as I know, applications and limitations are as follows:

·It DOES work on all original Caterham RoadSport and SuperSport ECUs.

·It DOES work on all MGF and MG TF ECUs.

·It does NOT work on turbo ECUs. This includes ZT-T and ZR-Turbo conversions using dztrp006 firmware.

·It does NOT work on Freelander ECUs.

·It SHOULD NOT be used on cars with air conditioning installed.

·It IS compatible with all of my firmware patches. So you can use it with Live Mapping, Dual Map Switching etc.

Turbo, Rover 75, MG ZT and Freelander ECUs seem to have significant differences in the way they control the air conditioning systems which are not compatible with this wizard. The wizard will not be able to find all of the tables and scalars it needs and the menu option will remain disabled.

Feel free to contact me if you have any questions or queries.