During my trip north through France last week, the engine started misfiring badly after I switched off for 10-15 minutes (say, for petrol stops or shopping).  The engine would restart easily enough, but on pulling away, I’d get several seconds of absolutely no firing at all.  The misfire affected all four cylinders simultaneously, and it felt as though either fuel or sparks had been completely cut.   Suddenly, the power would come on again, albeit intermittently.  This would continue for several minutes, making smooth progress in towns a bit tricky.  After a while, the misfiring would eventually clear, especially when I gave the engine some beans.

I’m ruling out individual connectors to coils and injectors, and thinking instead of something that could stop firing completely, such as a wiring fault in the injector or coil looms, ECU earthing, and ignition switch.  I think the battery connections are ok as dash lighting etc remained working all the time.

The only recent work has involved fitting a new Banner battery.

I plan to hook up the ECU to Easimap to do a static check and then to record a 30-40min in-flight logging session.

So, a couple of questions for starters:

What do you chaps think might be causing this?

Which specific Easimap panels should I include for my in-flight logging session?

All advice much appreciated.

Could you still here the pump running when it misbehaved..?

Could also be the lambda messing around, particularly if it's fine on WOT.

EDIT: try disconnecting the lambda before restarting in a similar situation and see if it runs fine on basic ECU control.

Having mistakenly filled the Elise with  high ethanol fuel on my way back after our trip, the engine ran ok but felt down on power,. Unusually, the engine stalled after every restart ( normally it just starts and ticks over). This is a bit left field for you but .....

TPS:  I'll look at that.  I've heard they can disintegrate due to engine vibration.

Good question about the pump, but I wouldn't be able to hear it over my ear protection!  I'll check the loom and connections.

Crank sensor - hadn't thought of that.  I'll check the loom.

I had a similar problem with my old car fitted with a Blackbird engine and the problem turned out to be a loose earth wire for the engine loom.  Worth checking all connections?

At the risk of falling into the trap of making educational suggestions on removing the contents of shelled zygote containers by applying negative pressure:

How many tank refills have you done since you've been back? Has the frequency of the problem changed with this?

What's the battery voltage while cranking? And do you have a functioning alternator warning light?

How many cables are connected at each battery terminal?

Does it have a master switch?

John, that sounds exactly like 1 of the issues I had when I purchased my R400D. The ECU was a Caterham locked variety which failed completely when Northampton Motorsport were examining it. A new unlocked ECU and map from NMS and the car is an absolute delight.

I have the strange feeling you already have an unlocked ECU though?

Thanks for the extra feedback, chaps.

Some answers to your questions and comments:

(I suppose that's what you might call la fate des grands-mères!)

How many tank refills have you done since you've been back? None

What's the battery voltage while cranking? 12.6v (just checked this)

And do you have a functioning alternator warning light? Yes

How many cables are connected at each battery terminal? -ve: one fat black, +ve: one fat red plus a smaller lead to 12v socket: 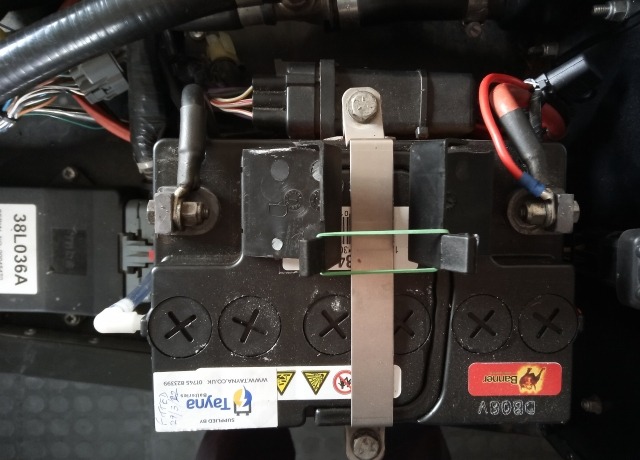 Does it have a master switch? Yes

I have the strange feeling you already have an unlocked ECU though? No, just the standard CC-locked 38L036A MBE992.

Sounds like classic fuel vaporisation, which some R400s suffer badly from.

Now that's very interesting.  When I mentioned the problem to my wife a few days ago, that was her immediate reaction (she used to run an MG Midget which suffered from the malaise).  I wonder if that's made worse by ethanol-laced petrol, which has a higher vapour pressure than unadulterated petrol.   I'm also wondering whether a good test would be to drain the tank (Mrs V's Fiesta would be more than happy with the transfusion) and refill with "E0" (if I could find it)?

Is there a reason why only some R400s suffer from this, rather than all?  And if ethanol petrol is the culprit, would a remap fix things?

In the meantime, I'll do more checks:

One remaining question is:  Will an Easimap logging session help me diagnose my problem, and if so, which specific panels should I include?

Although there may be a fuel vapourisation issue, it shouldn't be a problem with a fuel injected car compared with a carburetted one, an issue that has the same sort of characteristics that I had with my R400 may be applicable. With my car, it only happened with high ambient temperatures (30C or higher) combined with slow speed running (such as in heavy traffic) and exacerbated by high altitude, leading to a too-rich mixture that fouled the plugs. It seemed to be due to poor mapping in the default map relative to coolant and air temperature and heat soak in the engine that needed to be evened out when the car gets some air flow into the engine compartment again, followed by the engine "clearing its throat" to clean the plugs off.

If you are able to stop the car at the side of the road when it does this and pull the plugs, the condition is characterised by sooty plug tips.