That should be as below. 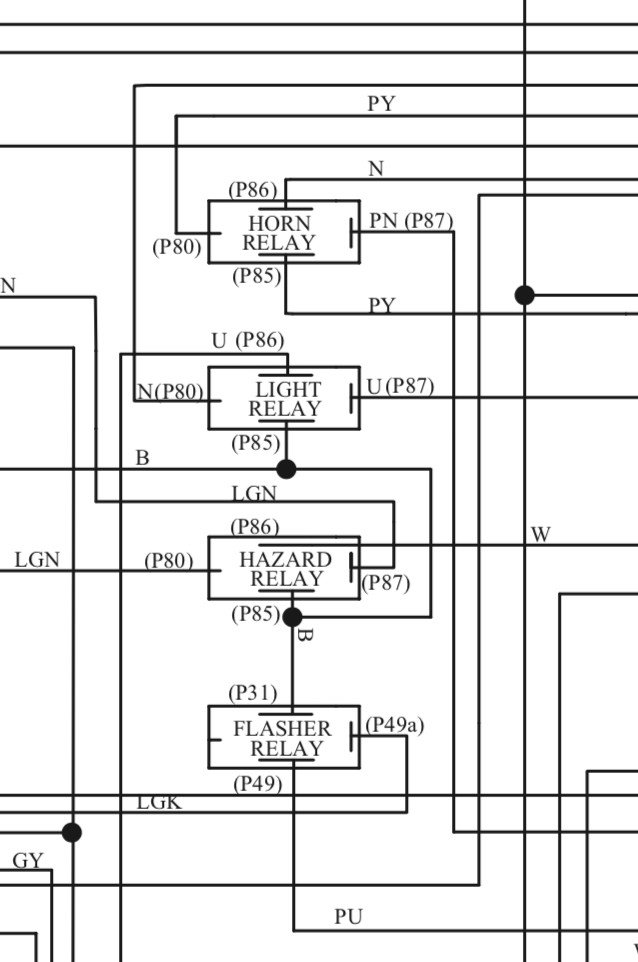 A 1997 K-Series wound have originally been EU2, if it helps!

So whatever caused the breakdown was not relay related. As the car is now fine and i've effectively done nothing to fix it the whole thing is a mystery. Nothing looks loose that i can see. Other than swapping coil (which didn't resolve) and removing and reinstalling the same relays i've done nothing.

Thanks for the diagram JK. Stu thanks for the EU clarification. I thought (possibly wrongly) that when i upgraded my car VHPD etc (i did a K series fettle first before going Duratec) that the Emerald ECU was remapped to EU3 by Dave Walker.

I may have missed it further up the thread - but have you checked the MFRU? Isn't it this, in the engine bay, that contains the Fuel pump relay and main ECU supply relay?

I believe that Revilla has put wiring diagrams and explanations on Blat Chat in the past.

I have the MFRU diagrams and the suggested fix if anyone needs them.

Have you checked the main feed into the engine bay for a good contact? For the K-Series it was a heavy (2.5mm?) purple wire linked to a brown near the MFRU, if the connection is dodgy/intermittent it can cause all sorts of confusing issues.

OK I'll check this to see.

...but have you checked the MFRU?

Good call!  Concentrating on individual relays, I'd completely overlooked the MFRU as a possible source of the problem.

I believe that Revilla has put wiring diagrams and explanations on Blat Chat in the past.

There's a veritable mine of information here on the EU2 engine loom, and an informative thread (post #8 on) here.

I guess both of these should help your old school auto electrician...

Thanks John for the links

This sounds like the fuel circuit, yellow with a green line. It runs ... everywhere.

inertia switch intermittent connection failure - test by shorting it (the terminals were goosed.)

purple connector as in #37 - should replace it anyway, a "well known" point of failure that connects the engine loom to 12v power. Terminals were goosed.

the "large grey plug" multi connector, my fuel feed supply was intermittent because the yellow/green connector was loose inside i.e. terminal was goosed.

Can you hear the pump priming? Sounds like not. If you feed 12v straight to the pump does it work?

I also checked for heat soak damage (loss of conductivity due to hardening of the wire)) where the yellow green runs along the front of the bulkhead with all the other main loom wires, but it was ok.. if I thought a little stiff.

In the end I replaced the entire engine loom (thanks Andrew).

Which reminds me the brown feed wire from the alternator; the connector to the alternator disintegrated upon being touched; however I forget if that is relevant to this problem.

so my trouble was caused by geese ;-)