Has my fuel pump died?

Like many others previous I think I have an issue with my fuel pump.
I have a 2013 Sigma Supersport and took it out last weekend but I wasn't able to get it to start this weekend.

The only thing I had done inbetween was loosen the bolts to the roll over bar to fit the straps for a half hood.... I definitely tapped the bottom of the boot a few times, so it's possible I may of "upset" the fuel pump doing this.

On start up the starter motor is working... however I'm not getting any noise from the fuel pump priming when I turn the key to the second position. Following many posts such as this I've gone down the list and I'm pretty sure that the inertia switch is working properly, the fuse is fine, the battery is fine and the fuel pump connector is receiving 10.5V (lower than I expected but enough). 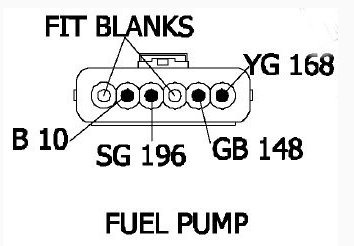 With the fuel pump connector disconnected I did a continuity test on the pins on the fuel pump between SG196 and GB148 (senders for the fuel gauge) as well as B10 (Earth) and YG168 (12v supply) both passing.

I moved to supplying an external 12v power source to the fuel pump - as mentioned by John Vine in comment #13.
"You could apply a separate 12v supply to the yellow/green (YG168 below) using a back-probe, or you could detach the connector and apply 12v direct to the pin in the top of the pump assembly that matches YG168.  In the first, you'd be using (and thereby testing) the existing earth; while in the second, you'd need to add a separate earth to the pin corresponding to B10 below:"

When completing the circuit between YG168 and B10 there was a clunking noise from the fuel pump... but no whirring noise.

At this point I'm a bit stumped and have to ask if anyone has any idea what I should try next.... or is the fuel pump dead?

I'm not sure about one step... have you tried a good jump feed and a good earth direct to the pump with all other circuits disconnected from the pump?

PS: Do you need any more of the wiring diagram?

Everything else was disconcerted from the pump.

Is this what you mean?

Although I don't understand the diagram, I'm looking at this.

Yes. I was effectively asking if the multiway connectors had been disconnected so that nothing on the loom side of that could have an effect on the test with the direct jumps.

I don't think that there's anything else that you can do.

Sorry to hear of your woes. As JK says, you've done all the usual diagnostic tests, so I fear it may be time to take out the pump and get it checked.  For info on removal, see "Removing the fuel pump" in this guide.

Can you post a photo of the barcode label on the top of the pump?  The important number is the one at the top, which is the Ford P/N.

When you say "external 12v power source", was that another car battery?  And if so, was it fully charged?

I've just run a test on my 2008 Duratec (same pump and connector as your Sigma, I'd imagine).  With leads run from a benchtop Banner battery across the pump pins matching B10 and YG168, I got a small spark and a healthy whirring noise.

So, if you're getting a "clunk" instead of the whirring, you need to take out the pump and get it checked (or replaced).

Thanks Both.
John - Please see below. It seems the part number is 3M519H307... I'm thinking this ebay listing of a new part for £54 is better than the same part listed by caterham parts for £500

As you've probably noticed I've taped over the fuel outlet.. this is because I've done exactly the same as this person did a few months ago.... I'm still figuring out how to get the stub out, it seems stuck in there, even when pushing down on the release mechanism.

I can't comment on which cheap-o replacement would be best.  If you have any concerns about Chinese lookalikes, you could always take a punt on a second-hand Focus pump from a scrappy.

Re the stuck stub, all I can suggest is to try screwing in a suitable woodscrew, clamp that in a Mole grip, and then encourage it to come out while pressing down on the tab.

Ford pumps in general can and do fail although usually they are very reliable. It may also be worth checking with a motor factor as at least it will come with a warranty. I would be very suspicious of extremely cheap 'ebay' type pumps. Also worth calling Redline.

Good Evening, just wondered if you had any luck with a cheaper version off eBay or did you get a replacement from CC in the end?

I also have the same problem but likewise would like to explore all avenues before purchasing one from CC.
If you could let me know it would be much appreciated.