Spittal Windfarm, Caithness, some will love it and some will hate it but it brought a sigh of dismay to us and on our return from Orkney we discovered that the road from Altnaharra to Lairg is undergoing the same fate, it's like saying goodby to an old friend, once wild and natural and now somehow spoiled and degraded.

Fine by me. And better than many of the alternatives.

And it wasn't all that wild and natural before ... there's a line of pylons and a road...

Wind farms may be better than many alternatives but the proposed connection of the Equinor and Hornsea wind farms across East Anglia into Norwich Main is a prime example of the negative impact. Oh, and we get Sizewell C as well .....

Wind farms don't offend me at all.

Having just driven through Flanders and northern France, and seen the many wind turbines, or indeed those between Barnstaple and Ilfracombe, I think they lend interest to the view.  Much better that smoke from chimneys.

If we are to make a significant improvement to our energy security we need onshore wind, offshore wind and plenty of solar (just think of all those warehouse roofs where lots could be mounted), all of which can be installed and generating long before any nuclear plant.

We will certainly also need new nuclear, which will almost certainly be adjacent to existing or closed nuclear plants, as at Hinckley Point or Sizewell.  Regarding power lines, remember that all the power generated is aggregated into the grid, that is rather the point of the system.

I was surprised when talking to an RR engineer about their modular plants (i.e. submarine technology applied on land) that these are also at least a decade away.

Jonathan, that is probably the  most ill informed and disappointing comment you have ever made but you always like to be the first to comment so I understand.

"And it wasn't all that wild and natural before ... there's a line of pylons and a road..."

I doubt if you have ever driven along that road but stand corrected if you have, however, the pylons and road were erected to service the farm and transfer the electricity south.

Regardless, the point I was trying to make was loss of natural beauty and habitat but I am old and not long to go on this earth and I will miss the wild unspoilt beauty ... but I will always have my memories.

I find the wind farms off the coast at Formby add interest to the horizon: 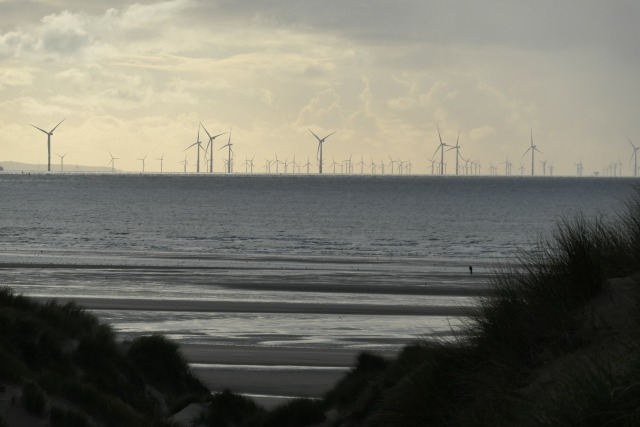 I cant lose any sleep over them . Having grown up in a coal mining area , with a coal fired power station a few miles away , and slag heaps aplenty I find quiet and clean wind turbines relatively inoffensive . I know Caithness and Sutherland  pretty well, and much of the  gorgeous landscape looks very different  to how it did before we cut the forests down, shipped the locals to the USA and freed up the land for sheep .

Given that the alternative is an oil refinery I do not see a problem with wind farms.

Down here in Kent many locals have objected to wind turbines and solar installations. I imagine they will also object to £4,000 energy bills. We'll find out in a few months.

Like John, above, I grew up in a mining town, playing on the local slag heaps, tobogganing down on bits of wood, familiar with the gas tanks, belching chimneys and pea-soup fogs that were little to do with fog and nothing to do with pea-soup.

When the first wind farm was built in view of my house, I was welcomed it.  By the time of the second farm nearby I began to take more interest in them.

Over the years, as I learned more about the costs, subsidies and things like how many were detuned to produce less power because the owners got a bigger subsidy from a lower production bracket, I've become ever more disillusioned.

I'm sure there will be many well informed members here who will be infinitely more versed in their benefits who will tell me where I am misinformed and point out my ignorance, but alas, I am now rather skeptical, and heading towards cynical.  I'm all in favour of solar panels, and the solar panel farms around here make no more impact on the environment than the many glass house farms here.

Yes, all our landscape is man-made, but when do you think anyone is going to look at the blight of a wind farm on our landscape as they a ribbon of green hedges or dry stone walls?

Given my ill-informed choice I think I'd prefer nuclear, despite learning about the way we were lied to by about the leaks from Windscale, which decided to rebrand itself in an attempt to wipe the slate clean (like one or two of our banks in more recent times).

But while every little helps, how much point is there in the UK going to Net Zero, when even Germany is one of the biggest coal burners in the world, and fights any cutbacks that will make the least dent int heir productivity?

I expect I'll have the erroneous ways of my thinking explained to me.