Derek , i think it may be difficult to "sort out our own" by banning Immigrants, can the NHS stand to loose 12.5 % of its already depleted staff,  can Higher education survive if it looses 30% of its academic staff , Schools loosing 15% of teachers, and 16% of new teachers, figures for trades and unskilled workers harder to come by, but i'm betting they are quite high , I can't see any of that improving our country i'm afraid ,

Won't they just bring the goods in through container ports along with the other 20+ million units that already does.

No need to use Dover.

what makes me laugh is the gov keep on about net immigration figures we send out professional people and  get back I. Return ?.   Think that poss means  nearly poss over half million coming to uk every year  it cannot work

sorry if sounds a bit radical

It is not radical Derek, just wrong.

The migrants are young fit already educated and work which results in them paying more tax than they cost in services.

BBC - EU migration: How has it changed the UK?

On average contributing £2300 a year more than locals. 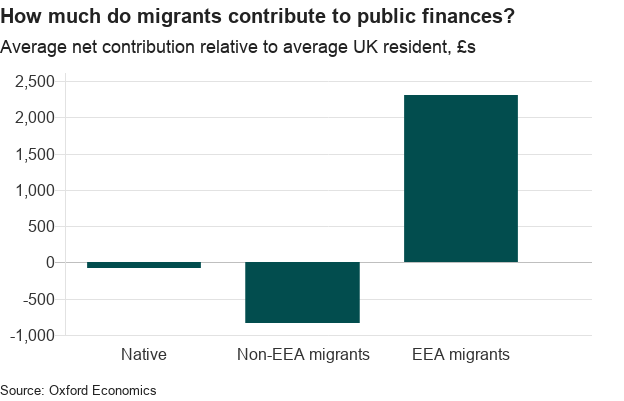 The lack of investment in education and training for those in the UK is a problem. Just not one related in any way to either the EU or migrants.

Hi Doug not a lover of graphs.  Don’t think they show the real picture so let’s leave it as we disagree on this subject as my  views are poss a bit radical

There are a couple of things you say that i can sort of agree with, guiding youngsters into professions/careers more carefully and identification  of true benefit cheats, but some of your points, I Think, are based on propaganda rather than truth ,  Total net Migration to UK is closer to 270,000 ,  over 70% of immigrants live in the private rented sector so do not need social housing, ergo they do not dispossess the indigenous population , there is little evidence that as a group they get preferential treatment for social services ,  yes immigrants can access health care, surely that's only fair ,  all people should have access to good health care , around 14% of the UK population can be classed as immigrants, of which around 30% , of that number , are EU citizens and about 80% of those are in work therefore paying tax , NI etc ,I don't have figures for the rest but I'd like to bet the majority are in work , I think what I am trying to say is immigration has purely been used by certain groups as an easy and obvious target to stir up strong feelings,

As we ,the UK, are not a member of Schengen we have always had full control of our borders, just  various  governments have policed things poorly, why would leaving Europe make any difference ?

It will make UK scientific/Arts research much narrower,  The EU currently Fund in excess of £1 billion per year, we could/will loose this, if we loose funding we loose the top tier of education in all fields, leading to less innovation within industry across the board, I don't believe the Government will replace this funding stream

Just a few of the reasons I believe Brexit is the most foolish thing we have volunteered for, ever,

oh and I am by no means a "left wing liberal" although I am probably on the liberal side of Right wing :-)

Hi Tim will try and give my thoughts point by point

5Sorry but not much on politics and nobody  nows  what is going to happen after brexit so we will have to wait and se what the gov,, give into  and to be honest not into politics so personally no idea ,only thing  glad about is that we have not got Corbyn in power as to me he is a total fruit cake

all the best Tim think we agree to dissagree but that makes the world go by.

For now anyway all the best Derek

No problem with people having different views to me, after all if we all thought the same there would be no conversation and life would be bloody boring :-)

and yes I disagree with your points and possibly your views although I don't know you so that's a bit of a generalisation,

I'm afraid some of your points are just not backed up by the facts, however two final things before we agree to disagree,

and finally, I would fight to my dying day to support the principle that you can have and voice those views  ,  even if they are wrong  ;-)

Hi Tim.  Good of you to admit you are wrong

all the best derek