I've 2 weeks leave in September and was thinking of taking my first 7 tour in southern Europe.

Provisionally: England to Spain by ferry; across the Pyrenees to southern France; Monaco, Venice; Stelvio pass, then up to Cherbourg.

The general idea is "interesting roads to interesting places", so the time between driving is as much fun as the driving. I already have a few destinations in mind (Verdon gorge, Ferrari factory, Le Mans, Champagne or wine regions), mostly camping, but with B&B every few days.

Has anyone done something similar? Or know of similar forum posts? If so, any advice about places/roads to go (or avoid) will be greatly appreciated.

I planned the route, including everything we wanted to do, to find out we'd need 6 months to do it justice

We drove to Lake Garda and back some years ago. There are lovely roads all over the place, have fun. Main thing is be flexible on the route choice and use autoroutes and ear plugs if you need to do big chunks of mileage to get to the nice bits. 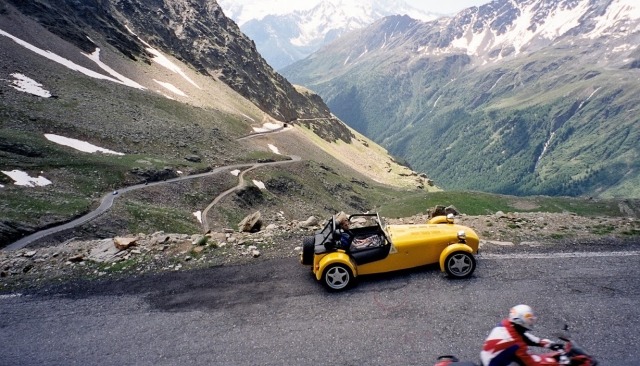 I work for John Lewis and am taking 6 months off next year (on full pay as a long service award) and will be taking my Caterham across Europe in a similar tour to the one you describe!

.... I'll be following your tour carefully and making note of any tips etc!

I think Doug raises a good point about using autoroute. There I no shame in getting a few miles cracked between the good bits rather than flog through villages, speed restrictions and cameras.

My advice is look at what you want to do where and then map study the hell out of the routes between them. Choice of navigation software and devices makes life a lot easier, annoyingly standard software needs to be tweeted and finessed to help it find those memorable routes. This is easier done with a cup of tea and a lap top rather than sweltering with your feet in a pizza oven by the side of the road.

I have to say I think you are missing out on Spain and I would circle back to get more Spain especially the North Coast and the Picos de Europa in favour of northern France.

Regardless you will ha e a great time, sunscreen, hat, decent sun glasses aggressively long lunches in the heat of the day. All in a 7 what's not to like?

" to find out we'd need 6 months to do it justice"

I have hundreds of relevant routes in MRA (My Route App) all shared.

I usually reckon on two days on, one day off. And allow time to do a road more than once

it's about the journey not the destination, until you get there.