REMEMBER: there's a reasonably active WhatsApp group that accompanies this SIG. Contact JM on ev@caterhamlotus7.club if you want to join that or this SIG.

WHAT’S NEW IN THE EV WORLD

We had a fairly lengthy discussion about the comments made by Bob Laishley, Simon Lambert and David Ridley on the "An Evening with Caterham Cars" held on the previous evening (2022-12-12). Here's some of the discussion:

... it has to be credible to the brand which is lightweight fun to drive, and simple and the core element of that is a track, day for me and you know if you got 1 h, session during the day of a track day 1 h in the morning, 1 h, in the afternoon, you want to be able to run for 20 min, have a cup of coffee or a tea, or a read a Book, and then get back out of the track and there were other 20, min so making a 7, that is capable of running wide open throttle for 20 min, charging in 15 min, and run again is a massive challenge for any OEM on the plane...

There's probably a lot more that I've forgotten or didn't make notes on. Please let me know if you attended and would like to have this post updated.

As mentioned above, here's a screen shot of the spreadsheet that calculates power needed to overcome drag at a given speed. If you'd like the source spreadsheet then please contact me. 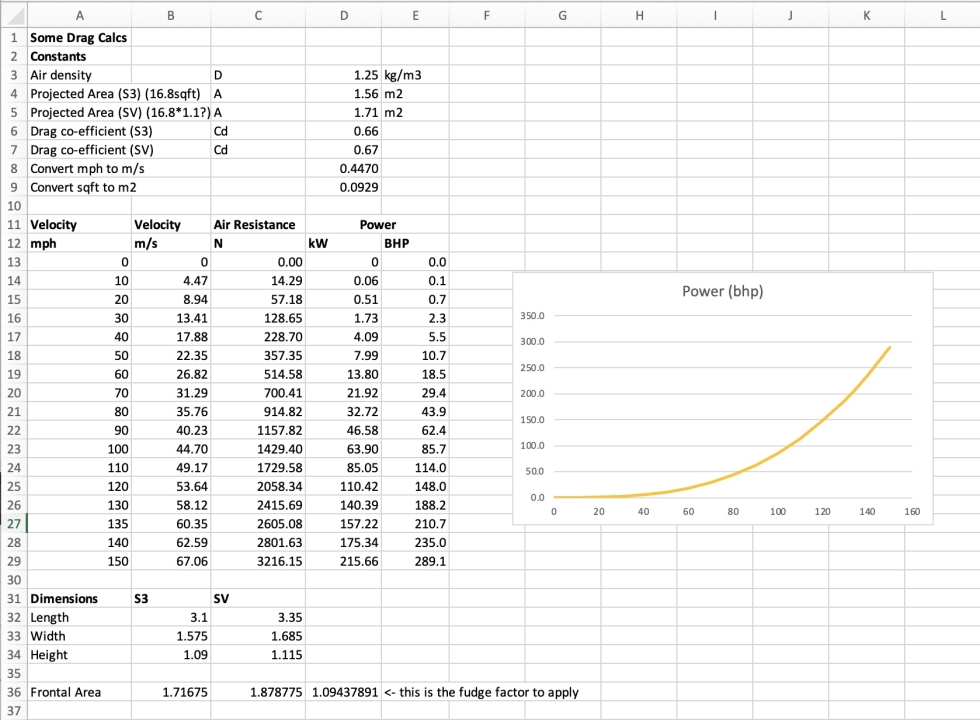 The fairly simple math came form here. The figures for frontal area and Cd are guesses but seem to make sense from other discussions on these forums.